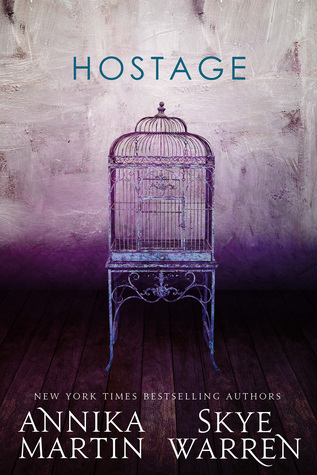 I NEVER KNEW WHEN HE’D COME TO ME. ONLY THAT HE WOULD.

I’d never even kissed a boy the night I met Stone. The night I saw him kill. The night he spared my life. That was only the beginning.

He turns up in my car again and again, dangerous and full of raw power. “Drive,” he tells me, and I have no choice. He’s a criminal with burning green eyes, invading my life and my dreams.

The police say he’s dangerously obsessed with me, but I’m the one who can’t stop thinking about him. Maybe it’s wrong to let him touch me. Maybe it’s wrong to touch him back. Maybe these twisted dates need to stop. Except he feels like the only real thing in my world of designer labels and mansions.

So I drive us under threat, until it’s hard to remember I don’t want to be there.

Until it’s too late to turn back.

Hostage is a loose sequel to the first Criminals & Captives book, Prisoner. However, each can be read independently of one another.

Stone is darker than Grayson (from book 1) but I found that the book was actually a bit lighter. There was more mystery and intrigue in it than in the previous one, as the gang is trying to identify a couple of the key men who ran the human trafficking ring they were trapped in as children. There is none of the on-the-run shenanigans that our first couple went through.

Hostage is a very slow burn romance. When the hero and heroine first meet, she is 16 and he is a decade older. Although intrigued in (and attracted to) each other, the physical aspect of their relationship is not explored until Brooke is an adult. During this period, they only meet a few times, months apart, as Grayson keeps track of her.

There are also a few scenes of struggle and physical restraint that made the story hawt!

There are three main points that have caused me to rate this book as four stars instead of five.

Firstly, the idea that Brooke’s parents were able to so well hide their destitution while still living the high roller lifestyle publicly is pretty flimsy. At one point it states her mother is working double shifts in a bakery in the next town to keep up appearances in their social circle, but this would never escape notice for long, though it apparently does in the book. The family is on the edge of ruin for years while hiding it from everyone.

It is entirely possible I suppose, but I found that the level of disbelief I was asked to suspend was too much.

Secondly, the identity of Keeper was obvious to me early on.

Thirdly, and most importantly, the ending was way too easy and “light”. Everything just fell together perfectly for the characters. I wish Stone and his boys had roughed Brooke up a little bit in order to get the identity of Keeper out of her. There are tons of dark romance novels out there with interrogation scenes (my favourite is reviewed here!) and it would have been something much more real for the couple to have to work through. As it was, the ending was kinda wah-wah for me. Certainly not dark.

By the way, sorry for the lack of posts last week. I took a bit

of time off for spring break :) 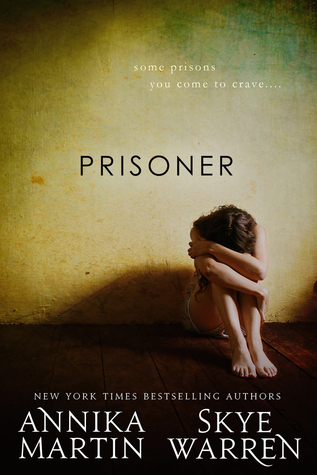 He seethes with raw power the first time I see him—pure menace and rippling muscles in shackles. He’s dangerous. He’s wild. He’s the most beautiful thing I’ve ever seen.

So I hide behind my prim glasses and my book like I always do, because I have secrets too. Then he shows up in the prison writing class I have to teach, and he blows me away with his honesty. He tells me secrets in his stories, and it’s getting harder to hide mine. I shiver when he gets too close, with only the cuffs and the bars and the guards holding him back. At night I can’t stop thinking about him in his cell.

But that’s the thing about an animal in a cage—you never know when he’ll bite. He might use you to escape. He might even pull you into a forest and hold a hand over your mouth so you can’t call for the cops. He might make you come so hard, you can’t think.

And you might crave him more than your next breath.

Prisoner is a dark romance book that begins with the heroine working as a writing teacher in a special program for prisoners. One particular prisoner makes her extremely uncomfortable – and wet – and he seems unusually fascinated with her as well.

Little does Abigail know that Grayson is playing her to send a message to his gang outside the prison walls, and that he is planning his prison escape using her as a hostage.

Abigail makes several escape attempts throughout this story so if you like a physical struggle where the hero subdues the heroine with his strength, this book just might you swoon.

I love that the authors created such a rich backstory to both characters and that there is a whole world that was created. It added much more depth and realism to a story compared to a romance that takes place within a vacuum.

Although this book was co-authored by two women, it flows seamlessly, without my being able to point out who wrote what section. They truly work well together and I am glad that there is another book to read after this!

The main drawback that I experienced with this story was that the level of corruption seemed too over the top. It seemed that no one was removed and that any new character you came across could be bought or manipulated. This is a plot device that I have hated since I was a small child reading about princesses dealing with court politics and I don’t like it anymore now. Otherwise, I would have rated it five stars. 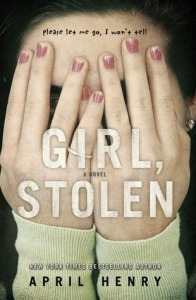 Sixteen-year-old Cheyenne Wilder is sleeping in the back of the car while her stepmom fills a prescription for antibiotics. Before Cheyenne realizes what’s happening, the car is being stolen.

Griffin hadn’t meant to kidnap Cheyenne and once he finds out that not only does she have pneumonia, but that she’s blind, he really doesn’t know what to do. When his dad finds out that Cheyenne’s father is the president of a powerful corporation, everything changes–now there’s a reason to keep her.

How will Cheyenne survive this nightmare?

I seem to be making a habit lately of unknowingly choosing young adult novels to read, whether they are marketed as such or not.

Girl, Stolen is another example.

It is a wonderful abduction/crime story – for tweens and teens. For that age group, I would rate it an excellent story. Friendship develops between Cheyenne and her reluctant abductor, Griffin, and the story has some twists and turns that are unexpected.

The fact that Cheyenne is blind is the most interesting aspect of the novel. I kept imaging what I would do if I had been the one kidnapped, and then realizing – oh, that doesn’t work because she is blind, she couldn’t follow that plan.

Listening to everything from her perspective really helps the reader to imagine their life as a person with a physical limitation, especially in an extreme situations when you can no longer rely on your usual aids and loved ones for assistance.

For me, Girl, Stolen was a little too tame and the characters predictable. I like tortured souls and dramatic confrontation in my books, and R-rated sex or violence goes along with that. Other than the PG-13 rating though, this book was very good, and there are lots of people who don’t share my preference for R-rated material.

I listened to Girl, Stolen on Audible. I’d recommend reading it instead, the voice performer was not very good. She did a great job of performing Cheyenne, but terrible at the multitude of male characters. Hopefully the author opts for dual narration next time.