Have you heard of Broadchurch? It is a British crime drama set in a small coastal town of 15,000 residents and it is the best thing since sliced bread.

I watched this show when it first aired in North America a couple of years ago, but between moving and whatnot, I entirely missed the second season and now we are on the third. To catch up I decided to re-watch the entire first season. I was curious whether it would hold up now that I know what happens, and boy did it ever! 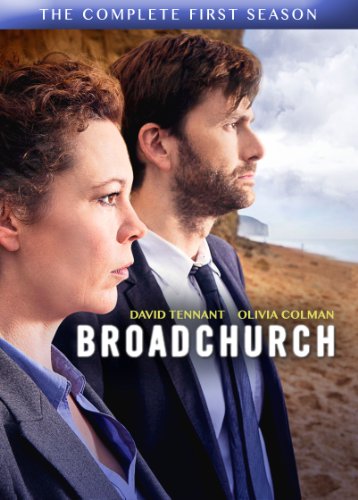 The pilot opens with the death of 11yo Danny Latimer. His death is quickly ruled suspicious and the entire first season (8 episodes, about 50 minutes apiece) is spent tracking down his murderer.

Danny was survived by his Mom (Beth), sister (Chloe) and Dad (Mark).

This is something that I love about British dramas; they don’t feel as if they have to somehow wrap it up and finish the entire mystery in one episode. They have faith that their audience can carry forward interest from week to week. American crime dramas, like Law and Order, Blue Bloods, CSI, Bones … they all seem to have to solve a murder in 40 minutes, which leaves very little time for exploring the intense nuances of emotion behind every situation, and the complicated web of lies and secrets in every person’s life. Throughout the course of Broadchurch season one, we learn (presumably) all the secrets of the Latimer family and many of the other village residents as well as the investigators, DI Hardy and DI Miller (featured in the DVD cover photo above).

Miller with her family at a memorial for Danny.

There aren’t too many shows that can make you cry multiple times in the pilot episode alone! Because you explore the mystery of Danny’s death over so many episodes, and over considerably more time in tv-land, you feel as if this is actually happening. I found it easy to process the evolution of events and emotions with the characters. Just look at the emotion on Mum’s face as she realizes that the body found on the beach is her son.

Police trying to drag Beth away from her son’s body.

The show covers every aspect of real life for the family. The full emotional range that each person can feel – and how each person grieves differently – is depicted over the following weeks, along with the criminal investigation, the involvement of the press and the emotional toll it takes on the police officers leading the investigation.

I expected DI Miller to be emotional because she is a long-time friend to the family and knew Danny all his life, but Hardy was a newcomer to Broadchurch. He literally arrived the night before the murder. To see the deep emotional connection that develops between himself and Beth and Mark was … inspiring? to see. I don’t think that is the right word, but it surprised me to see this relationship develop and the show would have been missing something without it. While Hardy is never going to be a friend who pops round for dinner, a bond develops over the season that I suspect will always be there. It is a deeply personal thing I suppose, to accept someone into your home in your most vulnerable moments, to bare every secret and skeleton to him while he investigates the murder of your child. You have to trust him to find the right person, and put together a strong enough case to stand up in court.

The investigators walking with the family and other villagers in a silent vigil.

I also found it surprising to see the humanity of some of the reporters reporting on Danny’s case. The locals who were a part of the village I expected tact and common decency from, but the female reporter from the Herald also show a surprising amount of compassion. Throughout the season I kept willing the family to lock her out, not give her any time, because I didn’t trust her from the start, but she gives them good advice from the heart and is sensitive in her reporting.

It would have been easy to paint her – or any number of people on the show – as evil but the creators were careful to depict each characters as regular people who are made up of good and bad, each with skeletons in his or her closet.

I love Broadchurch and so do most of my family members. It is my favourite show currently and I can’t wait to binge watch the second and third seasons. If you are remotely interested in crime shows, drama, or British tv, you need to give it a try. I could feel the emotional tugs on my heart with every episode and was often reduced to tears.

Obviously this show deals with difficult subject matter but the violence and subject matter aren’t any worse than your typical American crime drama. Actually, I think there is probably less violence. The emotionalism is partially just me, but mostly a testament to how well done this show is.