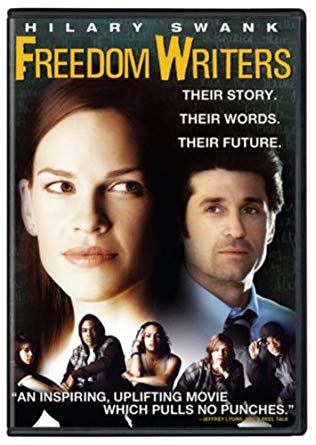 Freedom Writers was released in 2007, starring Hilary Swank. It is a drama based on the nonfiction book, The Freedom Writers Diary, and is based upon a true story.

The book and the movie tell the story of a remarkable teacher and group of kids from Woodrow Wilson Classical High School, in California. At the time of the book’s writing, this was one of the roughest schools in the country, filled with gangs, violence and a failing academic record.

Hilary Swank portrays teacher Erin Gruwell, a novice teacher who reshaped the kids in her classroom, helping them catch up academically and exposing them to the wider world. She worked two part time jobs to pay for opportunities and teaching resources – including English books – that were not funded by the school.

Here is the trailer.

I have seen this movie several times, but was inspired to re-watch it after listening to the book The Hate U Give.

The themes of racial tension, gang violence, education and growing up in rough neighbourhoods are similar.

The movie is entertaining and inspiring. There is violence, which flows well with the storyline and themes without becoming graphic. Although the subject matter isn’t happy, it also brought back a slight sense of nostalgia for the 90s.

I thoroughly enjoyed re-watching this film, and now I am am more interested in the Freedom Writers today. I want to google and see if any of them became activists or educators. I am also going to try to find a copy of their book to read.