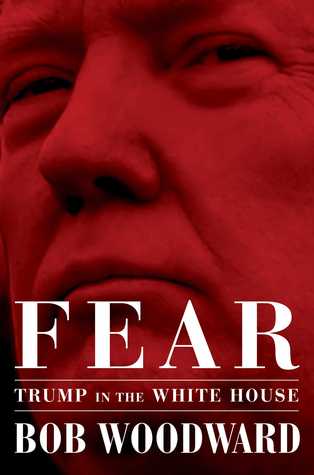 With authoritative reporting honed through eight presidencies from Nixon to Obama, author Bob Woodward reveals in unprecedented detail the harrowing life inside President Donald Trump’s White House and precisely how he makes decisions on major foreign and domestic policies. Woodward draws from hundreds of hours of interviews with firsthand sources, meeting notes, personal diaries, files and documents. The focus is on the explosive debates and the decision-making in the Oval Office, the Situation Room, Air Force One and the White House residence.

Fear is the most intimate portrait of a sitting president ever published during the president’s first years in office.

I have read several political memoirs and biographies over the last few months and enjoyed all of them. There is always so much drama in American politics that it truly gives rise to the term “politi-tainment”. Fear, Trump in the White House appealed to me specifically because it was written by Bob Woodward, who has a long history of writing presidential biographies and is a respected investigative journalist. I figured that this would potentially be the most neutral book yet out of all the “tell-alls” to have hit the bestseller shelves in the last two years.

I learned a few new things about the Trump administration, and about Donald Trump himself, in this book. Some sections reinforced my negative impressions of him as a person and as a leader, while other points softened my judgement.

One point that comes across more clearly than anything else is this. Donald Trump is bull-headed and emphatically does not care about logic, truth, or the consequences. He regularly is quoted as responding “I don’t care” to aides and advisors, when their arguments conflict with his intentions. And while President Trump experiences extreme tunnel-vision on some topics, he is usually easily distracted in the short-term, much like a small child.

Trump does seem to care about his campaign promises more than anything else, and is dedicated to ramrodding them through in order to pacify his base. This is peculiar to me, as he regularly pivots and changes his mind on the fly about a vast variety of issues, and even conservative Republicans in Congress are reported to have begged him to let certain points go. But for whatever reason, Trump is committed to achieving those points that he was elected on and that dedication is to be commended, even if I don’t agree with his political views.

Generally, I believe that Trump cares more about being famous and being perceived as powerful, than anything else. He certainly isn’t a martyr, nor is he interested in governing to improve his country.

Woodward’s book is very factual and dense at times. There isn’t a strong narrative like other recent political memoirs I have read, such as Becoming by Michelle Obama or A Higher Loyalty by James Comey. Mainly for this reason, I didn’t enjoy Fear nearly as much.

Fear tends to jump between news highlight reels at times, a symptom of the the vast quantity of news Trump’s team generates. He even addresses the notion that Trump and his team purposely flooded news agencies with so many juicy stories during the campaign and early days of the Presidency, both so that they would dominate the news cycle and so that otherwise major stories would be quickly pushed aside for the next headline, rather than receiving more thorough coverage and deeper journalistic investigation.

Touching upon Trump’s personal life, Woodward confirms the President and First Lady sleep in separate bedrooms, long a suspected belief of many, and also describes Trump – though briefly – as a terrible father. There is extremely limited mention of Baron, Donald Jr and Ivanka Trump, as well as quite a bit of talk of Jared Kushner throughout the book. There is no mentioned of the President’s other children.

Another point that surprised me through Fear, was the significant amount of cooperation between Trump’s lawyers and the Special Counsel’s office in the first year of Muller’s investigation. I did not anticipate this and wish that I knew the behind the scenes status today.

Overall, I feel that the book finished in a weird place. It covers the campaign and approximately the first 18 months of presidency in the White House. However, it ends there. I just naturally assumed that this type of book would either cover the campaign and/or cover the entirety of Trump’s first term of office.

One thought on “Fear: Trump in the White House”