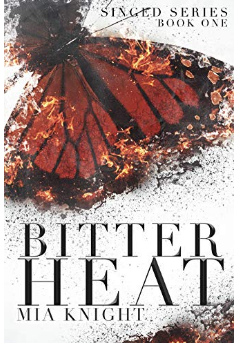 She was the wood. He was the flame. After this, they would be ash.

A cruel twist of fate leaves Jasmine Hennessy stranded in a remote cabin with her worst nightmare—her ex-husband, James Roth, who she hasn’t seen in five years. He isn’t acting like the man she married, but did she ever really know him?

One night together kicks off a series of events that threatens her freedom as Roth seeks vengeance on those who ruined him seven years ago. He’s determined to bring her back into the world she left behind where money is king, reputation is everything, and people will kill to keep their secrets.

Author’s Note: This is a dark romance novel with triggers and mature themes that may make some readers uncomfortable.

* I received a free ARC of this book in exchange for an honest review.

I read Bitter Heat in one sitting. And I want book two now. Not six months from now. NOW.

Sooooo, I guess you could say that I liked it.

This is the first book in the Singed dark romance series by Mia Knight. I hope it lasts a long time because it sure has started out strong.

The hero is James Roth, a self-made billionaire who takes cold ruthlessness to the extreme. He is determined to own and control his ex-wife “Jasmine Hennessy”, and punish her for walking out on their marriage years ago.

I have a feeling that book number two will be darker than book one, which is a-ok with me. I liked that there was a strong cast of secondary characters to flush out the story. Personally, I enjoy this because it makes the fictional world the author creates more realistic with the extra dimensions, but Ms Knight does an excellent job of controlling the flow of information, so it never takes away from the key love story between Roth and Jasmine.

If you like alpha males or dark romance, Bitter Heat should move to the top of your automatic buy list. It will be released on all retailers on March 29, 2019.