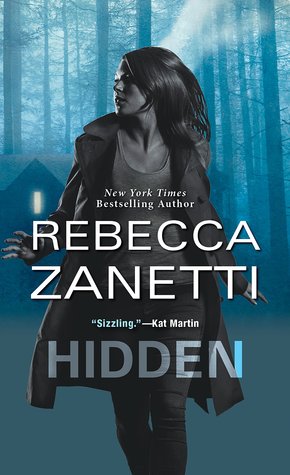 Hide. That’s all Pippa can do to escape the terror chasing her. But now that she’s off the grid in a safe house, she finds plenty of interesting things to watch through the window. Like her new neighbor, with his startling green eyes, killer smile, and sexy bad-boy tattoo . . .

Run. Malcolm West is fleeing the hell he unleashed in his last assignment as an undercover cop. A backwoods bungalow sounds like the perfect place to start over. Until he discovers he’s been set up . . .

Fight. Someone’s gone to a lot of trouble to bring them together. No matter how much he resents that, and his own driving needs, Malcolm will have to dig deep and let loose the banished killer inside himself, or Pippa’s fears could come true faster than the flip of a bolt in a lock .

Hidden is a great new romantic suspense novel from Rebecca Zanetti. It is the premiere of the Deep Ops series, and there are two more books coming up in a couple of months. I love it when an author doesn’t keep fans waiting for long periods of time!

I thoroughly enjoyed this book and read it in one sitting. Zanetti introduces quite a few secondary characters and arching plot points that are clearly meant to carry the series through more than just the first book. I like when this happens in a series. To me, “community” within a book is what sets a series apart from standalones!

Most of the characters are a little whacky. You can tell that the world has chewed them up and spit them out and they are more than a little out of sync with society because of it. But it also leads to some interesting situations and wildly amusing anecdotes in the midst of a serious and fast-paced plot.

Even the dog is crazy!

West came up on the other side in case the dog made a move on Nari. What was it with the tie? It was blue with a red crisscross design on it. Pretty boring…

Force handed the tie to Roscoe. Snarling and growling, the dog took it over to the corner, where he started ripping it apart.

Forced eyed his calming dog. “I thought we were doing better with that. Hmmm. Okay”.

Suffice it to say, no one wore argyle again.

There is a lot of action in the Hidden, from shootouts and knife fights to bombs and abduction. This quote is from the start of one of my favourite scenes.

Strong arms banded around her waist from behind, and a hand clapped over her mouth. Her body seized. It took a second for her brain to catch up with reality.

She tried to scream and the large, male hand muffled the sound. The man lifted her right off her feet and turned, forcing her past the archway in the opposite direction from her car. Panic burst through her, and she started to struggle, fighting against him with all her strength.

I would highly recommend this book to readers of romantic suspense!