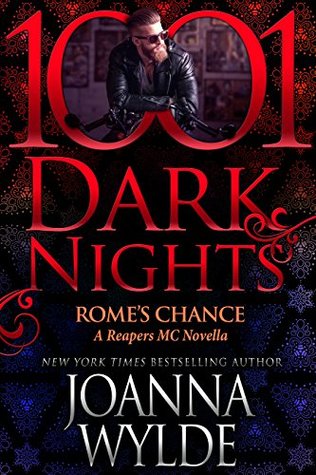 Rome McGuire knew he was in trouble the first time he saw her.

She was sweet and pretty and just about perfect in every way. She was also too young and innocent for the Reapers Motorcycle Club. He did the right thing, and walked away.

The second time, he couldn’t resist tasting her.

Gorgeous and smart, fun and full of wonder, she jumped on his bike and would’ve followed him anywhere. Still, she deserved a shot at happiness somewhere bigger and better than a town like Hallies Falls. Walking away wasn’t so easy that time, but her family needed her and he had a job to do.

When she came around a third time, he’d had enough. Randi Whittaker had been given two chances to escape, and now it was time for Rome to take his.

This time, the only way Randi would be leaving Hallies Falls was on the back of Rome’s bike.

**Every 1001 Dark Nights novella is a standalone story. For new readers, it’s an introduction to an author’s world. And for fans, it’s a bonus book in the author’s series. We hope you’ll enjoy each one as much as we do.**

Rome’s Chance is the first book to be released in this series in more than a year and I am so thankful Ms. Wylde is back!! Both the heroine and hero were initially introduced as secondary characters in Reaper’s Fire although the timeline has skipped forward several years since then.

I haven’t compared the word counts but this book felt so much shorter than the previous novella, Shade’s Lady. I have no idea why that is because I enjoyed both books, but this one just felt much shorter!

I will warn you, this book was drawing out my tears more than any other I have read in months! I was sick while reading it and perhaps a little more emotional than usual, but there are still some sad moments that you should prepare yourself for.

There is much less sense of the MC in this Rome’s Chance. To me, it read more like a contemporary romance with a hero who just happened to ride a bike, than a typical Reapers MC book. There is no visit to the clubhouse, no discussion of club business, and the only other Reaper who is even named in the book is Gage. And he still doesn’t have a single line. Also, there is less sex than normal for this author, but considering the shorter word count of a novella, that is obvious. I just felt like they had a less physical relationship that I was expecting.

I am glad that this author is back and hope that we get another book before summer is over. I will read anything she writes!