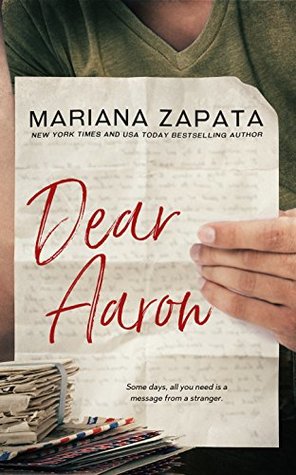 Ruby Santos knew exactly what she was getting herself into when she signed up to write a soldier overseas.

The guidelines were simple: one letter or email a week for the length of his or her deployment. Care packages were optional.

Been there, done that. She thought she knew what to expect.

What she didn’t count on was falling in love with the guy.

So THIS is the book I was supposed to have read before From Lukov With Love. There were no real spoilers by reading them out of order but it still irks me to have done so. I like to read chronologically.

Dear Aaron is a very nontraditional book. The first half is written in the form of letters (technically emails and then IM chats) between the hero, stationed in Iraq, and the heroine, living in Texas.

I think this is such an interesting route for the author to take. She didn’t just use the pen-pal idea as a hook for five chapters to justify its use, before having the characters meet up. They literally corresponded by email for the first nine months that they “knew” each other.

I wonder if Ms. Zapata had a difficult time writing those messages? It certainly doesn’t seem like it, I sorta sunk right into their conversations and got lost in the story. The dialogue between the characters certainly seemed natural to me. At times it is frequently hilarious. ie; conversations about buttholes.

Momma Santos is hilarious and I hope we get to read about Tali falling in love, because I am not done with this family.

The hero Aaron is attractive, kind, and mild-mannered. He and Ruby both have a fantastic sense of humour and are more than a little geeky. Aaron reminds me a bit of Channing Tatum’s character in Dear John.

Except there is a happily ever after in this romance story.

I do wish that the book had covered more time after Aaron and Ruby come together as an official couple but I guess that it is the benefit to reading about Ruby’s sister Jasmine in the follow-up. Updates!

For me, Ruby was the easiest (thus far) of Zapata’s characters to relate to which might have helped me to fall into the rhythm of this book. It is one I would recommend in a heartbeat but the writing style will not appeal to all readers.