I was lucky enough to receive an arc from the publisher for Judgement Road, in return for an honest review. This book will be released on January 30th, 2018 and I highly recommend it! 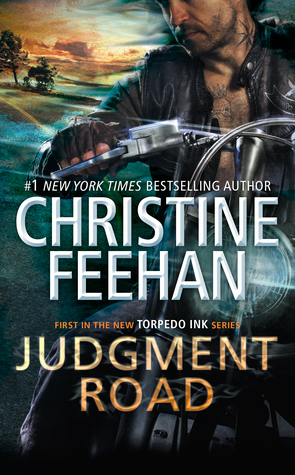 As the enforcer of the Torpedo Ink motorcycle club, Reaper lives for riding and fighting. He’s a stone-cold killer who turns his wrath on those who deserve it. Feelings are a weakness he can’t afford–until a gorgeous bartender gets under his skin…

Near Sea Haven, the small town of Caspar has given Anya Rafferty a new lease on life. And she’s desperate to hold on to her job at the biker bar, even if the scariest member of the club seems to have it out for her. But Reaper’s imposing presence and smoldering looks just ratchet up the heat.

Anya’s touch is everything Reaper doesn’t want–and it brands him to the bone. But when her secrets catch up to her, Reaper will have to choose between Anya and his club–his heart and his soul.

Judgement Road is the first official book in the Torpedo Ink MC series by Christine Feehan. It builds on the world first introduced in the Sea Haven novels (Drake Sisters and the Sisters of the Heart), but could be read as a standalone if you are not familiar with those series.

Judgement Road is everything Feehanistas have come to expect from the Queen of paranormal romance. There is a wonderful balance of main couple / background characters, action, sex, intrigue and sexy alpha bad boys.

The paranormal aspect of this book was toned way down in comparison to the Drakes and Sisters of the heart, to my surprise. This isn’t a criticism, I just expected more knowing that all of the MC members have “extra gifts”. There is some, but the book reads much more like romantic suspense novel than paranormal romance.

Other reviewers have pointed out that Reaper does something really stupid … like REALLY stupid … and that Anya forgives him too easily. I partially agree. I definitely would have liked for him to have to work harder to earn forgiveness. Ms. Feehan has a habit of letting her tortured heroes reveal their sob-story when they are in deep doodoo with the heroine, playing on her emotions to get themselves out of trouble which borders on emotional abuse in some situations. It definitely isn’t playing fair.

However, one of the strongest attributes these heroines share is their compassion and ability to forgive. If those personality traits weren’t at the forefront of their characters, these women could never take on such a damaged hero in the first place, so I am completely willing to let this point go for now, as long as it doesn’t reoccur in every book going forward.

The sex in this book isn’t overly explicit IMHO. There is definitely steam but I felt that the heat was solidly romance-level rather than erotica.

For Feehan aficionados, I am happy to report that the first chapter of Covert Game (her next book) is in the end of Judgement Road!