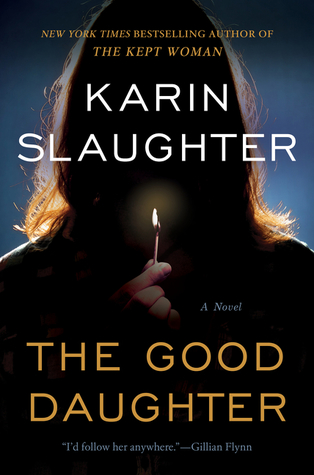 Two girls are forced into the woods at gunpoint. One runs for her life. One is left behind…

Twenty-eight years ago, Charlotte and Samantha Quinn’s happy small-town family life was torn apart by a terrifying attack on their family home. It left their mother dead. It left their father — Pikeville’s notorious defense attorney — devastated. And it left the family fractured beyond repair, consumed by secrets from that terrible night.

Twenty-eight years later, and Charlie has followed in her father’s footsteps to become a lawyer herself — the ideal good daughter. But when violence comes to Pikeville again — and a shocking tragedy leaves the whole town traumatized — Charlie is plunged into a nightmare. Not only is she the first witness on the scene, but it’s a case that unleashes the terrible memories she’s spent so long trying to suppress. Because the shocking truth about the crime that destroyed her family nearly thirty years ago won’t stay buried forever…

The Good Daughter is the most recent crime thriller that I have listened to during this kick that I am on. And it was EXCELLENT.

It was the first time that I have picked up a book by this author, and I have to say that her stories are detailed with deep backstories for each character and a ton of depth. Every character had different facets of their personality, and each had at least one redeeming quality, or character flaw.

I started this book thinking that it was mostly about the school shooting and Charlie representing Kelly, trying to get her off the murder charge, but this storyline only serves to bring the Quinn family back together after nearly twenty years. The Good Daughter opens with the tragic events that destroyed their family 28 years ago, and flashes back and forth between that night and the present. The story is also told from both of the daughters’ perspectives.

I felt that the pacing to the story was timely and finished this book in four days. I did predict the ending and unravelled several points in regards to the past and the school shooting very early in the book but I didn’t find that this took away from my enjoyment of the story at all. I will definitely be going back to read more books by this author!

This audiobook is very pleasant to listen to. It is read with a southern accent which changes slightly for each character, something that is really helpful, especially since the book is told from several characters’ POV.

There are graphic descriptions of violence, murder and sexual violence in this book. Generally, the victims are teens at the time and this may be difficult for some readers to get through.