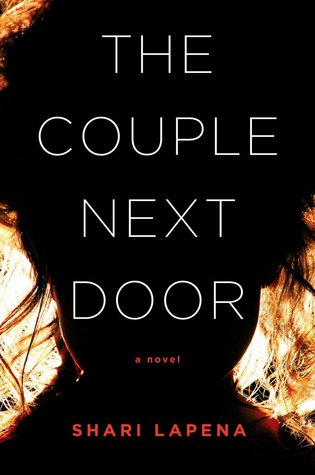 You never know what’s happening on the other side of the wall.

Your neighbour told you that she didn’t want your six-month-old daughter at the dinner party. Nothing personal, she just couldn’t stand her crying.

Your husband said it would be fine. After all, you only live next door. You’ll have the baby monitor and you’ll take it in turns to go back every half hour.

Your daughter was sleeping when you checked on her last. But now, as you race up the stairs in your deathly quiet house, your worst fears are realized. She’s gone.

You’ve never had to call the police before. But now they’re in your home, and who knows what they’ll find there.

What would you be capable of, when pushed past your limit?

Shari Lapena has been the bestselling author behind a couple of book club heavy hitters the last couple of years. Her book The Couple Next Door remains popular in my library and has received mostly rave reviews.

It is a crime thriller. A baby is abducted from her crib with no apparent evidence or motive. The parents are desperate to find her but police aren’t so sure that they are innocent.

The Couple Next Door is told from several different perspectives, but most of the chapters are from Anne (Mum), Marco (Dad), or the detectives’ points of view. This story is engrossing, and super easy to read. The language is simple but every character has multiple issues you have to work through, layers to peel back, while the reader tries to figure out who is behind Cora’s kidnapping.

Although abducting an infant is a heinous crime, there is little violence in the book and none of it is graphic. I wouldn’t consider The Couple Next Door to be a particularly dark book and several friends with young children were able to enjoy the book as well.

I loved this book until the very end. The only part I didn’t like was the final bit, after the arrest (or arrests), but I can’t elaborate without giving away an important plot point. You’ll just have to trust me that you’ll know it when you read it.

The narrator of this audiobook has a pleasant voice that was very easy to listen to. I would definitely be interested in other books she has read.

3 thoughts on “The Couple Next Door”