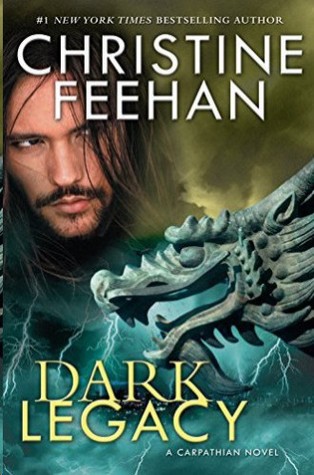 In a thrilling Carpathian novel from #1 New York Times bestselling author Christine Feehan, a woman fights to free herself from the grip of the vampire trying to possess her…
In a beautiful compound hidden away from the world, Emeline Sanchez tries to blunt the pain that has wracked her body ever since her terrifying ordeal in the labyrinth beneath the city—when she was forced to exchange blood with an evil master vampire.

Now, it’s his voice that haunts her…that calls to her in the dark…that never lets her rest. And while the children that she helped to free from his clutches struggle to heal, watched over by their Carpathian protectors, Emeline knows one thing: She must sacrifice herself to keep them all from harm…

Dark Legacy is the 27th book in the Dark series by New York Times bestselling author Christine Feehan. This series has been hit and miss for me for the last few years – to the point that I no longer buy them but wait until I can borrow the newest from the library – however this book is definitely my favourite from the “modern era” of Carpathian romance.

In many ways, Dark Legacy felt like a fresh breath of air and turned some of the more repetitive plot points around. The author has always blended fantasy and science fiction with romance, but romance was the key driving factor of every story and the genre in which books were categorize. I feel like this story almost turned the corner to have fantasy driving the story rather than the romance. I don’t mean this to be a slight against the author, because there was tons of heat between Dragomir and Emeline, but their relationship was not the driving factor in DL in my opinion.

Some criticism that I have read in the recent past of Feehan is that her books have too much sex in them and not enough plot. This book is certainly more plot heavy than previous works and the couple doesn’t jump into bed until the eleventh chapter. I like how they grew into a couple from first meeting and how the author developed their relationship amid a host of secondary characters. This book didn’t contain the usual isolate couple for half the book format that too many previous books employed and I actually wish that certain secondary characters had a little more interaction with the couple rather than only serving their purpose during battle scenes.

I loved that Dark Legacy gave us regular readers new insight into the Carpathian community as a whole, including differences between how they raise children and how humans raise children. Some readers might take issue with some of these finer points or accuse the author of heavy-handed heroes, but the reality is that they are a different species, and for long-time readers, the idea of these ancients blending into a modern world they have little experience with is ludicrous. It is much easier for the woman to adapt to a new lifestyle when she has only lived twenty or thirty years than a male who has lived 2000. The interaction between the community is important when they are spread out across the world and every Dark book is filled with so many battle scenes.

Another change that I loved is the author spent noticeably less time reminding the reader of previous plot points, characters and rules in this fantasy universe. Feehan usually writes her series so that a reader can pick up any book without necessarily starting with the first in the series. While I can understand the business acumen behind that decision, it is so repetitive for fans to have to recap in every book, especially at this point when most of her series have been on-going for so long. There was very little regurgitation of Carpathian/Vampire rules in Legacy and I hope that this continues.

I fervently hope that they next character to receive a book is Elisabeta, who was introduced in Legacy, I think she offers the best opportunity to read an old-school Carpathian romance with the D/s undertones I usually crave in my romance.