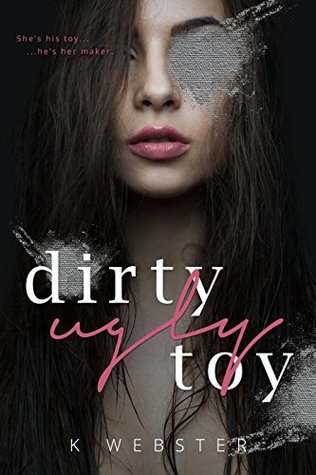 Her time is over.
Things are looking up.

Six months to toy with her.
Six months of vacation and a ton of money.

I’ll hurt her beyond repair.
I’ve been through much worse.

She’s difficult to control and doesn’t obey.
I’m done submitting to anyone or anything in this life.

The game has changed.
I will win.

Dirty Ugly Toy is a novel that blurs the lines of right and wrong, deals with abuse, contains dubious consent, and adult subject matter. If you are sensitive to violent sexual situations, the book may not be suitable for you. Some parts of this book are not easy to read and are not intended for everyone. However, those that keep an open mind and stick with it will not be disappointed.

I ordered Dirty Ugly Toy on a whim the other night, because it was recommended by two authors I read and follow on facebook. It was marketed as a dark romance containing dubious consent, a sub-genre that I have had a difficult time finding books that are worth recommending lately.

I don’t feel like this book was worthy of the dark romance tag. It is a contemporary romance, with possible dark scenes… another one of those books that I would classify as “grey romance” if there is such a thing.

The beginning of the story definitely sets itself up to be a dark romance. The hero is initially portrayed as a serial killer – he’s not – and it seems the author is setting up a dark psychological thriller / dark romance. However, that quickly fizzles out.

Brax is a devoted son. His mother, who was a drug addict when he was a child, left a deep mark on him. Brax is a successful, billionaire business owner who abducts drug-addicted women from the streets and keeps each for a period of about six months, before returning them to their home city. During those six months, he helps them to detox with medical professionals, uncovers their backstories, the reasons they started using in the first place, and their aspirations for life. He wants to change them for the better.

During this time he also indoctrinates them into his brand of sexual relationship, one between a sadist and a masochist. The heroine who features in this story is a natural masochist however, and she has the emotional upper-hand in their relationship from the beginning. She’s different.

Jessica was addicted to heroine against her will by sexual traffickers and is deep into the throes of addiction until Brax picks her up. However, she is also extremely well educated. Before her kidnapping, Jessica was a trophy wife to a wealthy politician who is currently running for President of the United States. Of course, this husband is cruel, sadistic and very abusive, which is why she never attempted to get back home or contact him after ending up on the streets.

This is why I don’t feel like the dark romance tag is applicable. Brax and Jessica have consensual sex and play in S/m scenes. Jessica’s detox is admittedly against her will, but she is more than thankful after the fact and it is medically supervised the entire time – as safe as something like that can be. Brax saves her from her ex-husband who they inevitably run into and helps take the creep down. Jessica has the ability to leave Brax during their six months together, after she is physically healthy, and has access to a therapist specializing in D/s and S/m relationships the entire time. She also is able to leave Brax after the six months – she is not tied to him.

So how in the heck is this considered to be dark romance or dubious consent?!

I understand that some of the subject matter is dark, and it could be disturbing for people who do not want to read about prostitution, drug addition, etc. But for me, the essence of a dark romance is that the romance is dark.

The story isn’t terrible although events all fall into place rather conveniently. At the end of the day though, I finished reading this book less than a week ago and still had to reopen my kindle to look up the hero/heroines’ names. So I wouldn’t say it is very memorable or that I would read it again.