Shades’s Lady counts as book #6.5 in the Reapers MC series. It is a novella and a fun departure from the previous books. It tells the story of Shade, the national President of the Reapers MC and takes place in a different location than any of the other books. You won’t meet many familiar faces, but the new ones introduced certainly make up for it! 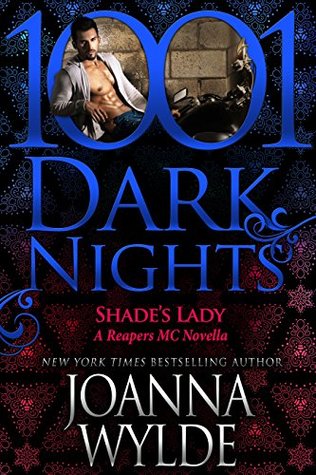 Looking back, none of this would’ve happened if I hadn’t dropped my phone in the toilet. I mean, I could’ve walked away from him if I’d had it with me.

Maybe it was all over the first time he saw me, and he would’ve found another way. Probably—if there’s one thing I’ve learned, it’s that Shade always gets what he wants, and apparently he wanted me.

Right from the first.

So first off, this is a novella so obviously it is the shortest book so far. Also as obvious, I wish it was longer! I wanted to explore Shade more and the unique aspect he is in as national President of an outlaw MC. Most of the complaints that I had about the book stem from its shorter length, but I want to be fair and judge the book as the novella it was intended to be.

So I did love this book and feel that it added some freshness to the series. We didn’t get to revisit any of the former main characters, although readers were briefly introduced to Shade in a couple of earlier novels.The heroine, Mandy, is also completely new to Reapers MC.

The one thing that all heroines in this universe seem to share is that they have gumption! They are all real ladies, not too prissy or perfect and each has faults. But they have to have a certain level of confidence to stand up to an outlaw biker, and this is usually what attracts the hero to them.

Mandy has had a rough life so far but she gave up everything to support her sister and three little nieces going through a rough time. This pretty much nominates her to knighthood in my opinion, since she doesn’t even have a bed to sleep in as a result!

Shade has the patience of a Saint! It surprised me how much of a “good guy” he is considering his office, but I guess you need to have a fair amount of patience and diplomacy to be the big honcho.  I wish we could have explored his character more but you can only do so much in a novella. Hopefully, these characters will show up again in future books.

I love how the author weaved together the subplots and new cast of characters that Mandy brought with her. From her boss “Bone” to her family and the Sheriff’s Deputy her sister starts dating, I didn’t feel at that the story was lacking due to a smaller word count. It only became obvious in the club world. The only Club characters that really get introduced, besides Shade, are Dopey and his Old Lady.

This struck me as weird, since Shade supposedly has two brothers assigned to him at all times, in a bodyguard capacity. But we are only ever introduced to one. It would have made a lot more sense to me to either add on a couple of pages every few chapters to give Muscle #2 a storyline or to just write him out completely.

Otherwise, this story gets five stars and I cannot wait to get another book from Ms Wylde! She has recently teased that she is writing a book about Taz and that this will be the first book in a “side-quel”series about the Devil’s Jacks!!! Hopefully we also get Fathomless soon as well! It was originally supposed to be released in 2015 but apparently keeps getting pushed back due to publishing issues.

One thought on “Shade’s Lady by Joanna Wylde”