Reaper’s Legacy is the second book in the Reapers MC series by Joanna Wylde. If you are rolling your eyes right now, thinking to yourself NOT ANOTHER MC romance series, take heart, because this one is the best around and you’ll be glad you sucked it up and read just one more.

Wylde was a professional journalist before she moved into writing novels and her experience shows. She did major research into how MCs operate and the people who choose that lifestyle. It is reflected in the quality of her work, which has an integrity and honesty few other authors have managed to communicate. Wylde has done countless interviews with outlaw bikers and their women. 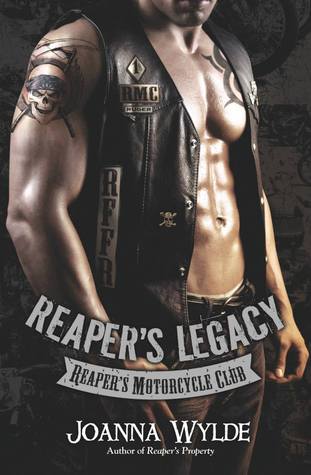 Eight years ago, Sophie gave her heart-and her virginity-to Zach Barrett on a night that couldn’t have been less romantic or more embarrassing. Zach’s step-brother, a steely-muscled, tattooed biker named Ruger, caught them in the act, getting a peep show of Sophie he’s never forgotten.

She may have lost her dignity that fateful night, but Sophie also gained something precious-her son Noah. Unfortunately, Zach’s a deadbeat dad, leaving Ruger to be Noah’s only male role model. When he discovers Sophie and his nephew living in near poverty, Ruger takes matters into his own hands-with the help of the Reapers Motorcycle Club-to give them a better life.

Living with outlaw bikers wasn’t Sophie’s plan for her son, but Ruger isn’t giving her a choice. He’ll be there for Noah, whether she wants him or not. But Sophie does want him, has always wanted him. Now she’ll learn that taking a biker to bed can get a girl dirty in every way.

Ruger is basically Noah’s Dad, in everything but name. So at its heart, this is almost a baby daddy / estranged parents story, except that Ruger and Sophie have never actually done the deed.

Reaper’s Legacy is the second story in the MC world of the Reapers where the heroine is new to club life. This gives the audience a chance to learn the rules with her. Like the heroine in the previous book, Sophie initially struggles with the sexist rules of the MC and with certain terms like “property” … but she also quickly becomes friends with the bikers’ Old Ladies, and none of those broads are the least bit intimidated, or oppressed by the club members. Sophie can see the differences in the treatment these women receive and how the club sluts are treated. Added to how kind everyone is to her and her son, she can’t quite slam the door on the biker world. Or Ruger.

I love how Wylde seamlessly patches together subplots involving a whole cast of secondary characters without taking away from the hero and heroine. In particular, we get to learn a whole lot more about Em Hayes and also have regular updates on Horse / Marie and their upcoming wedding.

Wylde’s bikers are alpha males, and kinda assholes to be honest, but they’re asses who love their women and would throw down for them anytime anywhere which takes a bit of the wind out of the feminist sails. While Horse, from book 1, is still my ultimate dream guy, I also absolutely love Ruger. We might kill each other in real life, but I love him.