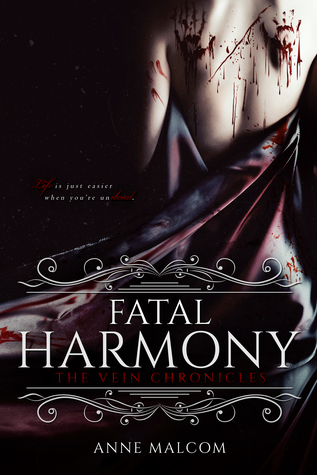 I may be the villain of the story, but at least I get a leading role.
Evil is a term thrown around history and literature as if it’s something so easily definable. A concept to fight against.
Evil doesn’t exist.
Neither does ‘good.’
Vampires do, though.
I just happen to be one.
I’ve cruised through the centuries managing to avoid all the wars, supernatural and human, but still going to all the best parties.
I would say I avoided bloodshed, but it’s kind of part of the whole ‘vampire’ thing.
I’ve lived on the fringes of a society that considered cruelty and sadism favorable character traits for almost five hundred years. Now I’m in the middle of a war that might just put my nonbeating heart in a lot of danger.
Battles, I can handle.
The impossible attraction between me and the vampire slayer, not to mention the penetrating gaze of the king of our race, on the other hand?
I might not get out undead.

Fatal Harmony is the first book in a brand new series by Anne Malcom, who is one of my favourite authors. She normally writes biker romance set in California, so a contemporary fantasy series about vampires, witches, werewolves, demons and slayers is quite the departure. I try to trust authors I’ve been following for a while though, and I always want to support them, so I had this pre-ordered on Amazon as soon as the link went live and read it the day it downloaded to my kindle.

I am so glad I made this decision. Not so glad about the one to stay up reading until 3 am just so I could finish book. Facepalm! I really need to start campaigning my work to provide paid “book days” to staff. I do work in a library after all. It is an expectation that we read and often. Let’s just call them professional development days, shall we?!

First off, Fatal Harmony is FUNNY! I love Isla. She could be my best friend. She always has a quip or a quick one-liner and is heavily influenced by the entertainment industry, one of the things that makes her so different from the rest of the vampire race. She is fashionable, a self-made billionaire and hard-working CEO who is incredibly sarcastic but not in an unkind way. Isla is unassuming. She is one of the best-connected and powerful of all vampires, due to her genealogical lineage and friendships with other otherworldly beings, but spurns the aristocracy and politics of her own race.

Malcom provides a fresh perspective on vampire literature. I am so sick of reading vampires but I love her take on them. They don’t sparkle. And they aren’t “turned” humans.

Vampires are their own race created by the gods in the dawn of time, just like witches and werewolves. And humans. Baby vamps are born to vampire parents and grow up remarkably human-like, until they reach the age of sexual maturity and undergo a transformation into vampirism … much like a second stage of puberty. Every few hundred years, vampire women experience an “awakening” for one year, in which their body basically wakes up and is able to procreate.

Malcom’s world is well thought out. All of her otherwordly explanations make sense to me which is incredibly important because I have a difficult time suspending disbelief while reading. I need to feel that the relationships and rules of a society are “believable” even in fantasy.

Along with the POV character Isla, we also meet a wide range of other characters. Her best friend is a bad-A witch with coven problems and her “not a side-kick” second-class vampire friend (vamp mom, human dad) has hidden depth. The King of the vamps is seriously scary and completely intrigued by our dear Isla, which is even scarier. He is one sexy and powerful potential relationship. I cannot wait to learn more about him in the sequel.

Finally, vampires’ mortal enemies Slayers, are back in town and one in particular has some pretty big secrets. And sex appeal to spare.

Life is gonna be interesting.

Fatal Harmony is the first book in the Vein Chronicles. The second is in progress but no word yet on a release date. Sounds like 2017 though!

One thought on “Fatal Harmony by Anne Malcom”