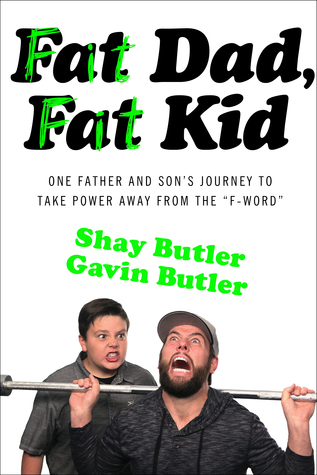 I’ve been a follower of the Shaytards for years and have seen Gavin grow from a young boy in the earliest blogs to a teenager. So I was excited when Shay announced that he would be writing a book. A little less so when the news broke it would be co-written with Gavin … no offence Sontard, but an adult and child co-writing is not my preferred book style. Still I eagerly picked up the book via audible and settled in to listen.

To my knowledge, this is the first father-son weight loss book that has been published. Weight loss is usually in the female realm, and there are plenty of mother-daughter or sister-sister tales out there, so Fat Dad Fat Kid was an interesting new spin on told-to-death subject.

I can’t say that I loved their book, unfortunately. Most of what was in it was already familiar to me as a regular viewer of the vlogs. Most purchasers, at least initially, were undoubtedly people already familiar with them and I expected the book to be touching upon new subject matter. I also expected there to be more of a narrative, but instead, each chapter was a different day over the course of a month-long fitness challenge that both boys undertook together.

Their book wasn’t the hard-hitting expose I was hoping for, full of deeper meaning and new stories about this inspirational family who kept me going in a very dark time. Perhaps if the format had been different, I would have approached the story differently and pulled more out of it. As it was, I had to force myself to finish the book, just so that I could say I could and write this blog.

If you need some inspiration, some wholesome entertainment or want to learn more about living positively and being happy, I definitely encourage you to check out the Shaytards on youtube. Especially back when they were doing the daily vlogs. But I just can’t recommend this book.

2 thoughts on “Fat Dad, Fat Kid: One Father and Son’s Journey to Take Power Away from the “F-Word””