Out of the Ashes is the third novel in the Sons of Templar series. Although this series can be read out of order (and honestly, I mistakenly did this), I’d read it in order if I could do it over again. 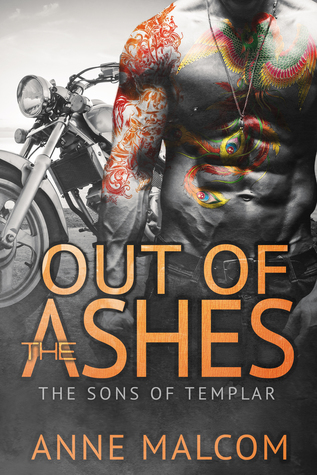 Living a life in darkness causes the soul to char to ash. Battling demons by turning himself into a monster is the only way he can survive…the only way he can keep a grip on sanity. That grip is precarious at best, every day is a silent battle with demons that threaten to yank him into the truest form of darkness, the abyss he’ll never escape. Then it happens. Light shines through the cracks.

Happiness. Mia Spencer’s life is full of it. She has an amazing new job, friends, family, and the light of her life – her daughter Lexie. Running from the demons of the past, escaping a hell that she vowed Lexie would never know about, she worked through hardship and near poverty to create something she was proud of. Buried deep inside, underneath the swell of love she had for her only daughter, were the fractured pieces of her. Pieces that were smashed and battered when she was young and vulnerable.

Then she meets Bull, who seems to hate her on sight. He screams danger, from his huge physique, to his beautiful ink, to the motorcycle club he belongs to. He is silent, his glares threaten to burn her into flames, yet she finds herself falling for him. Finds this broken man slowly fixing the pieces she thought would stay shattered forever.

Out of the Ashes is my favourite book in this series so far! Mia and Lexie are adorable together. It is overwhelmingly obvious that the author is a fan of Gilmore Girls, as Mia and Lexie share more than a passing resemblance to the main characters on the show. They wittily banter back and forth non-stop, and are both addicted to coffee. They have the sweetest mother-daughter relationship and similar backgrounds.

Unlike in the show, Mia was born into trailer park trash, but she finds herself a mother and alone at 16 and raises her baby on her own, by starting out as a maid in a hotel working for room and board and rising to hotel manager. Lexie, just like Rory Gilmore, is a super smart, super kind, eclectic and not at all teenagerish teenager who is destined for great things.

Here is an example of some of the more refreshing banter between Mia and Lexie:

“Okay, I’m giving the coffee a hundred and twelve and the pancakes a solid nine and a half. I deducted half because I feel like they could be improved by adding chocolate chips to them,” I declared, leaning back in my seat.

Lexie nodded at me. “I’m seconding the coffee, and I’m hugely impressed a town this small has embraced acai bowls. I must say this one is hells good.”

I rolled my eyes. “I fail to believe that any acai bowl could be “hells good.” It’s a crime to breakfast foods everywhere that that can be considered appropriate as a meal. It’s a smoothie poured into a bowl. It’s like cold soup,” I said, my nose curled in distaste.

Lexie folded her arms. “Acai is a super food and it does wonders for your immune system. It’s full of antioxidants and is a much better way to start the day than with processed sugars and bleached flour,” she told me in a scolding tone.

“The only way, other than coffee, to start a day is with sugar. That’s the only thing that gets me out of bed in the morning,” I argued. “That and the possibility Jensen Ackles will finally realize he’s in love with me,” I added dreamily.

Lexie sighed. “I don’t know how you’ve stayed this skinny, Mom. You should need a crane to get you out of the house,” she said, scrunching her nose at me while she looked me up and down.

“I don’t know how my daughter learned about acai and freaking quinoa when such things are sacrilege in my mind,” I countered.

“A little thing called the internet,” she replied.

With a teenage daughter in tow, Mia is the most reluctant of all the leading ladies so far to pursue a relationship with an outlaw biker. She is painfully aware that building a relationship with the club could place her daughter at risk and while she is more than willing to risk herself for love, no way is she going to do the same to Lexie.

Leading guy Bull feels the same way. He lost his first wife due to a war with another club and has been in the throes of depression ever since. The optimism and zany banter that Lexie and Mia bring to town starts to draw him out, but Bull remains the quietest, grumpiest and most taciturn biker of the group. Even his club brothers seem to be removed from him and nervous of his control at times. I get the feeling that the only people completely safe from Bull (when he loses it) are Lexie and Mia.

I’m impressed with Mia’s forgiving patience because I would have given up on him long before, but I guess that is just the animal magnetism at work. Bull and Mia also have the kinkiest relationship to date. He is definitely dominant in bed and likes to call the shots outside of it as well. Mia keeps him on his toes and is absolutely alpha when it parenting Lexie, but she loves Bull’s wild and possessive personality and is totally on board with bangin’ against the wall. I wish we had seen more of this unrestrained passion.

I think my one regret in this novel is that Bull and Mia spent so much time working through his (totally justified) hangups to establish themselves as a couple, and then overcoming Mia’s reluctance to associate with people who could be a danger to Lexie, that we don’t actually see them together as much as the other couples. I would love to read another book about them in the future, even if it is a novella, and also to see more of the parent/friend relationship that develops between Bull and Lexie.

There is a super sweet and heart-warming romantic sub-plot between Lexie and bad boy Killian who has been raised by the club and I can see that the author has also published a novel about them, so I am exited to read that one soon.

Overall, I absolutely loved this book. As I said, it was the first one that I read, although I held on to my review so I could release them in series order. I’m thankful that taking a chance on this new-to-me author paid off and cannot wait to read more of her works!