A Game of Chance is the fifth book in the Mackenzie’s Mountain series by Linda Howard. My blog’s name is roughly taken from this series, because it had a marked influence on me in my youth. 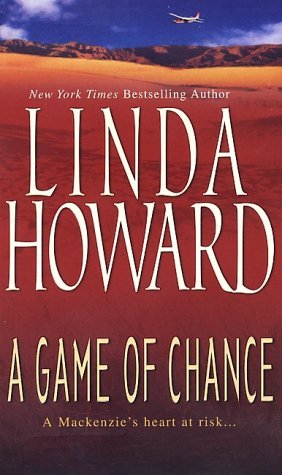 The last book in the Mackenzie Family series focuses on Chance Mackenzie, a feral, homeless adolescent until rescued and adopted by Wolf and Mary Mackenzie. The stunning and aloof half-breed has built a career in undercover ops, first as a Naval Intelligence Officer, then as a private consultant. However, one particularly vile terrorist has always eluded the law. Chance and brother Zane find a way to lure Crispin Hauer in: They’ll use his daughter Sonia as bait. First step: Make Sunny fall in love with Chance. What could be simpler?

This is probably the only series I’ve read by Ms. Howard, but it has a special place in my heart. I love macho men like Chance. This type of character epitomizes everything I am attracted to in a man; he determines his own future, is handy, knowledgeable in self-defence and survival skills, kind and funny, and big and strong and take-charge.

I do wish that the story had of been expanded upon in the post-plane rescue scenes. I always feel that romance authors rush the endings. It’s like they feel after the action has come to a head, they only have a chapter or two to bring the story to conclusion. Well, that’s just not true.

This plot made me wonder, if I was in Sunny’s position, could I ever forgive Chance for his deception and betrayal? Would you?

I think that I’d get over it fairly easily. It is not as if the two were in a relationship and then he betrayed her, with another woman for example. He set up an unknown woman to take down her terrorist father, and in the process, managed to free her from him as well. And Chance protected her as much as he could through the whole process.

I like how he handles Sunny at the conclusion, giving her space to process and then overwhelming her with love, all the while having her back with Margreta. That is how a real man treats the woman he loves.

The following excerpt from A Game of Chance is my favourite scene. It is so heartwarming and sweet that it actually made me cry. It is my dream to one day marry into a large, loving, demonstrative family such as the Mackenzie clan.

‘Chance looked up at him, the only father he had ever known, and the man he respected most in the world.

“I don’t know who gave birth to you,” Wolf said. “But I do know bloodlines, son, and you’re a thoroughbred. Do you know what I regret most in my life? Not finding you until you were fourteen. Not feeling your hand holding my finger when you took your first step. Not getting up with you in the night when you were teething, or when you were sick. Not being able to hold you the way you needed holding, the way all kids need holding. By the time we got you I couldn’t do any of that, because you were as skittish as a wild colt. You didn’t like for us to touch you, and I tried to respect that.

“But one thing you need to know. I’m more proud of you than I’ve ever been of anything in my life, because you’re one of the finest men I’ve ever known, and you had to work a lot harder than most to get to where you are. If I could have had my pick of all the kids in the world to adopt, I still would have chosen you.”

Chance stared at his father, his eyes wet. Wolf Mackenzie put his arms around his grown son and hugged him close, the way he had wanted to do all these years. “I would have chosen you,” he said again.’     – copyright to Linda Howard

Isn’t that the sweetest? One of the things that we don’t do often enough in this world, is to tell our loved ones exactly how much we love them and that we are proud of them. Hearing those words fills the recipient with such a feeling of empowerment and hopefulness, providing courage and belief in self to get through future hardships.

Even though I am re-reading the books out of order, I will try to post reviews as I do so. Lately I’ve just been reading based on what I feel like in that moment, because I’ve felt so overwhelmed. I haven’t wanted to exert the discipline necessary to read and review things in order!