Does it ever feel like time just gets away from you?

As previously announced, my favourite author Ms Cherise Sinclair is releasing a new book in her erotic-fantasy series, The Wild Hunt Legacy, on January 26th. I wanted to review the first two books prior to the release of the third so that I had the whole series reviewed … here we are two days before and I’m just starting. Gosh dang it!

Nonetheless, it is time to push on, so here is my review for the fantabulous (yes, that’s a word) novel, Hour of the Lion. 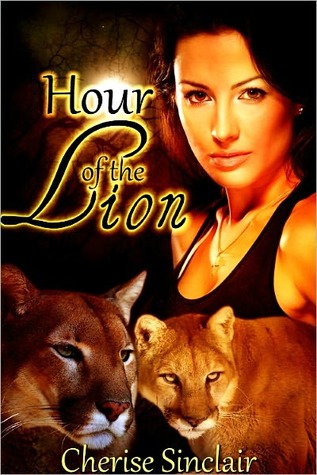 As a dedicated covert ops agent, Victoria Morgan follows two rules: accomplish the mission and protect the innocent. When bitten by a werecat—yeah, that was a sucky day—she must investigate beings that shouldn’t exist and are hard as hell to identify. Just how can she tell if a person is human–or an animal-shifter who enjoys Bambi-sized snacks?

During her investigation, she finds a real home and friends for the first time. Sweet, right? But there’s a flip-side: the bad guys are waiting for her to turn into something four-legged with a tail, the shifters suspect her of spying, and she has fallen in love with a pair of Thumper-eating werecougar brothers.

Her duty is to expose their existence. Or she could follow her heart and protect them with all of her deadly skills.

The first time I heard that Sinclair’s new release was going to be a menage romance,  I was a little wary. You can read a lot of things that wouldn’t actually appeal to you in real-life, but this was one of those topics I didn’t think I could get past. But I love her writing and she has helped me through some tough spots in the past so I gave it a try anyway. There is something to be said for having an author who is an automatic buy!

I loved Hour of the lion!!!

The world that she created is so magical and much more complete than I was expecting. Instead of just the were-creatures that are the focus of the series, the author also builds her world with brownies, pixies, fire salamanders, et al, all in the background but contributing to the feel of this otherworldly community hidden in a remote mountain town.

Victoria was an incredibly spunky and vivid character, a really inspirational role model for any woman. I find that when I read many books in a row whose female protagonists exhibit the same major characteristics, I tend to unconsciously take on some of those attitudes. “Vic” attacks life with a take no prisoners approach and doesn’t let fear stand in the way of anything, so she is a great role model to be reading about.

This is one of my favourite quotes:

Okay, she was braver than this. She wasn’t a little girl unable to fess up to her actions. She’d done the deed – deeds – and not it was time to pay the piper. She stared into the fire and confessed …

Victoria isn’t afraid to do a lot of things that I am. Like stand up to a mean guy who stole a waitress’ tips, or break up a barroom brawl. Of course she is a marine and CIA agent with lots of training behind her. I’m certainly not. And she is a book lover to boot! What’s not to love?!

Calum and Alec, the two male leads in Hour of the Lion, are entirely drool-worthy. Both are strong, protective, thoughtful males who aren’t afraid to stand up to their mistakes when they get it completely wrong. And boy do they get it wrong sometimes! I like that both are patient and slow to pass judgement, even if they have quick tempers. I love heroes who have an edge of danger to them, something both Calum and Alec have in spades. De. Lic. Ious.

I loved Hour of the Lion and encourage everyone not just to check it out, but also all of Cherise Sinclair’s books. Here website is: cherisesinclair.com or her author page on goodreads can be found here.

I can’t wait to read Eventide of the Bear this week, but I will try to review the second in the series before I get to it. The OCD perfectionist in me will grump if I review out of order ; )

One thought on “Hour of the Lion – a review”