Alexandr and Jessica’s story is a two part story-line within the Submissive’s Wish series; this is the first part so the couple doesn’t get their happily ever after yet, but the author doesn’t leave you with a cliffhanger either. Part II is due out in September 2015. Thankfully, not a long wait. 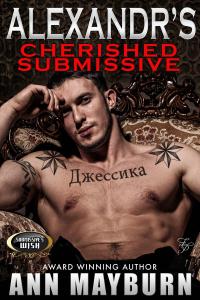 Here is the cover blurb for this book:

7 years before books I & II

From the moment Alexandr Novikov met the young auburn haired woman bartending at her uncle’s pub in Ireland, he’d been fascinated by her delicate beauty and fiery spirit. Unfortunately, he is in no position to offer her the kind of safe, normal life she deserves so he attempts to put her from his mind for her own good. Something easier said then done when a deal is struck between the Novikov Bratva and the Irish Cleary Gang, an arrangement that includes Alex and his men being on twenty-four hour bodyguard duty with the object of his forbidden desires.

Jessica Venture came to Dublin to spend some time bonding with her birth mother’s family, a connection she desperately needs after losing her adoptive parents within a year of each other back in the States. The last thing she expected was to fall in love with a handsome, mysterious, and sometimes scary man who was well known for his sexual appetite, but rejected her attempts to seduce him.

There are outside forces that will do anything to keep them apart, and Jessica will have to make a desperate choice that will change their lives forever.

Warning: There is light bondage, domestic discipline, spanking, and an F/F scene that is a voyeuristic Doms delight.

This is probably my favourite series at the moment, and has been for about a year. I was curious going in, because I knew that this book would be different from the others and I wasn’t sure how I would like that.

To start, ACS takes place several years before books 1 or 2, sort of like a prequel I suppose, and many of the life-changing, formational events that turn our beloved characters into the people they are haven’t happened yet. Plus, the reader is used to seeing them in a certain way and in a certain relationship so it is rather strange to see them with other woman. Thankfully though, I didn’t have any problems with the familiar characters and their undevelopment as it were.

Books 1 and 2 both feature female leads in their mid-twenties, several years older than Jessica’s 19, and their relationships are hot and heavy from the beginning. Alexandr’s Cherished Submissive is much more of a slow burn. Alex and Jessica are friends for months before they become intimate and their bedroom shannanigans feature much less dominance and submission than voyeurism and swinging, another departure from the other books in the series.

Now voyeurism and swinging aren’t really my thing, I’m more of a straight D/s person, so I didn’t enjoy the sex scenes in this book as much as I did in others, but they were still      H-O-T HOT!  And the plot development was great.

Jessica is young and innocent and sweet. Although a lot of people in her life have died, her birth parents, adopted parents and their parents, she is still such a kind-hearted person who sort of floats through life doing good deeds. She isn’t a pushover in any way, but she has great compassion and occasionally shames her bodyguards for not being more helpful to perfect strangers. Jess has a heart of gold.

Alexandr is pretty much what I expected from the first two books. He loves Jessica with everything in him and is desperate to protect her from the consequences of his fathers’ increasingly erratic plots, and the numerous enemies of both his Bratva and Jessica’s Uncle’s.

My favourite aspect to Mayburn’s writing is her ability to create such multi-dimensional characters and worlds, and to create multiple interesting secondary characters with depth and backgrounds without detracting from the leads. It was a treat to revisit many characters already introduced, including Dmitri, Maks, Ivan, Petrov, Catrin, and Nico, while also meeting Krom and Oleg. I cannot wait until Krom gets his own book, probably book 5 in the series.

The only section that didn’t quite hit it with me, is when Jessica discovers that Alex is a mega criminal and flips. At the time, her bodyguards lock her in the house to keep her from taking off before Alexandr can return from out of country the next morning. You never see her really lose it on them for physically holding her captive essentially, nor does she have a moment of doubt about what else they might do to her for Alex. Although they had come to love and respect her by then, their loyalty is to Alex and the Novikov Bratva first, and I expected her to be rather displeased for a period.

Plus, she totally caves to Alex upon his return. Granted, he makes a big gesture to show her how much she means to him, but I still thought she let him off too easily for keeping this a secret from her for something like 18 months!

The conclusion to Alexandr and Jessica’s story arc is coming soon: 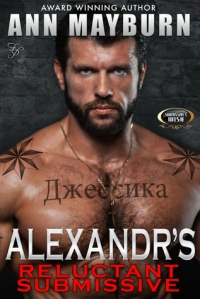