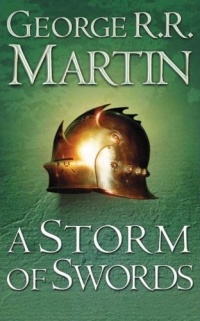 (A word of warning, this post will contain spoilers from the book)

I wanted to talk a minute to take about my impressions of A storm of Swords, by George R.R. Martin, now that it has had time to sink in a bit.

It was definitely my favourite so far.  The pacing was much quicker and more dramatic. From the Red Wedding, to the Purple Wedding, to the deaths of the Hound and Tywin Lannister, the shock factor just kept driving, again and again, boom boom boom.  I loved it.

The first novel was exciting as well, but I hadn’t yet seen the show and had trouble keeping track of all the characters and histories, on top of the rather complicated plot. The second book was easier and enjoyable, but by that time I had seen the show, and it stayed so true to the book, I got a bit bored.

This time around, things had changed. Maybe because it’s been nearly a year since I saw the third and fourth seasons, which are both based on the third novel,  but also because you can see where the book and the script are diverging in places, and its fun to learn the different interpretations.

Side-bar: Is Martin’s work really an interpretation?  It is HIS story after all. Hmmmm. Sorry, back to my regularly scheduled post.

I liked the bit that we had in Nymeria’s POV, finding the naked, milky, female body in the river.  I knew at once it had to be Catelyn but to find out in the epilogue that there was some magic about, made me think much harder back on that scene.  Did Nymeria somehow install some magic in the bloated corpse?

As the recording ending, I couldn’t help but gasp, “Holy Crap! Catelyn Stark is a zombie?!!”

Guess I’ll have to wait until next month to see if David and Dan write that in.